If you’d of said that SoundCloud rap would become its own genre, popularised by artists with names such as Lil Yachty ten years ago, you’d have probably been laughed at. However, the rap landscape has changed, with rappers becoming famous overnight if they’ve got a good following. We’ve seen in recent years just how popular SoundCloud rap has become, with a few leaders being at the forefront of it, one of which is the aforementioned artist, Lil Yachty.

Having turned 23-years-old just yesterday, Lil Yachty (real name Miles Parks McCollum) is without a doubt one of the new rap scenes golden boys. In five short years, Lil Yachty has gone from a relatively unknown SoundCloud rapper to working with the likes of Drake, DaBaby and A$AP Rocky. Whilst still being extremely young, it’s safe to say that Lil Yachty has already garnered a lot of fans from all over the world. In that time, he’s also built up a serious sneaker collection.

There is no denying that the Nike MAG is one of the most iconic sneakers in history. Having been shown during the 1985 classic Back to the Future II, the Nike MAG has remained a grail for sneakerheads for nearly 40 years. Designed by Tinker Hatfield, the futuristic silhouette was one of the standout moments in the film after Marty McFly, played by Michael J. Fox, put his foot in the shoe and was amazed by its auto-lacing capability. Of course, Lil Yachty has got his pair.

Seen pictured above wearing the Nike MAG as well as a Supreme Gucci box logo T-shirt, you’d almost expect Lil Yachty to have a pair of these. Made using a special neoprene foam, the Nike MAG have all the details that the original pair did. Light up elements on the midsole, strap and heel tab all work together to make this as close a replica as the real deal. Most sneakerheads will know that these released in 2011 and 2016 as normal and auto-lacing versions respectively. This is definitely one of Lil Yachty’s best shoes.

Crafted in a premium olive suede and using black accents, the Undefeated Jordan 4 is one of the finest AJ4s ever made. Orange detailing behind the tongue, as well as a velcro tongue tag, set these apart from any other Jordan 4 collab. With a very limited retro back in 2017, many thought they’d finally get a chance to own a pair. However, it wasn’t to be. Over the past few years, the price of these has skyrocketed with some pairs selling for well over €20,000. That didn’t put Lil Yachty off from getting his pair though.

Supreme and Nike have one of the strongest relationships in sneakers. Since first joining forces back in 2002, the two have gone on to make more than 30 collaborations. Always known for choosing silhouettes that you might not think about, Supreme put its spin on the Uptempo back in 2017. As with any Supreme x Nike collab, it was an instant sellout. With Lil Yachty being a big fan of Supreme, it didn’t take long for him to get a pair.

Pictured above in the “Red/White” Supreme Uptempo, Lil Yachty shows off his love of the brand. Updated details include “Supreme” wrapped around the midsection, replacing the traditional “AIR.” Other subtle branding included “Supreme” across the insoles. Prices on these have skyrocketed in recent years, with the sneakers going from €300 to €1800 in just a few years. When you’re worth an estimated $11 million like Lil Yachty, you’re probably not checking the price tags.

As one of the largest sports labels on the planet, Jordan has stores all over the world. Whenever it launches a new store, Jordan Brand will tend to create an exclusive shoe. From limited Jordan 1s in Paris to exclusive Air Jordan 3s in Seoul, Jordan Brand knows how to commemorate a new store. However, there are some sneakers which are more sought after than others. One of those is the Air Jordan 5 “Tokyo,” seen here on Lil Yachty’s feet.

The Tokyo Jordan 5, which was released back in 2011, is one of the most exclusive Jordan 5s on the planet. Released during the opening of a brand new Jordan store in Tokyo, the sneaker quickly sold out and hit the resell market. Featuring premium yellow suede, the Tokyo 5s include a “23” on the heel designed to look like a traditional Japanese character. Nowadays, the Tokyo 5s can sell for upwards of €5,000, making them a serious pair for Lil Yachty to have in his rotation.

Off-White™ and Nike truly changed the sneaker world when it was launched back in 2017. It helped cement Virgil Abloh as one of the most respected designers on the planet, securing him a job at Louis Vuitton and becoming a key figure in streetwear. Taking ten classic Nike silhouettes, Abloh applied his signature deconstructed across the range. There were some clear winners, from the Air Jordan 1 to the Air Presto, but one of our favourites was the Air Max 90.

Constructed in a simple white colourway, the Off-White™ x Air Max 90 features an icy sole as well as some unique additions. An exposed foam tongue played off Abloh’s love of taking something apart to show the hidden details. This can also be seen on the heel tab which lifts up to show the style code of the shoe. Of course, it was the writing on the medial side, shoelaces and midsole that gave this shoe added edge, as well as the zip tag. These have remained one of the most sought after Off-White™ Air Max sneakers of all time.

As one of A$AP Mob’s key figures, A$AP Bari had pushed VLONE at the time A$AP Rocky was making a name for himself. The organic growth, limited releases and highly popular VLONE label led to good things for Bari. When Nike announced it would be working with VLONE founder and fellow A$AP Mob member, A$AP Bari, the streetwear community was interested. After a lot of hype and constant teasers, the world finally got a look at the VLONE Nike Air Force 1.

Made in a black tumbled leather, this premium take on the AF1 was a big hit. Contrasting orange detailing can be seen on the Swoosh as well as throughout the shoe. Messages such as “Every Living Creative Dies Alone” across the heels made these a statement sneaker. Of course, the devil was really in the detail on this shoe. A “V” tongue tag replaced the traditional Nike Air, as well as custom lace dubraes. Spotted on both Lil Yachty and Drake above, this is one of the best AF1s ever made.

When Kanye West announced he was leaving Nike, the sneaker world was truly in shock. After revealing plans to join adidas, the sneaker community was sceptical about how successful it would be. However, following on from two successful seasons in 2015, the scepticism faded away. In 2016, Kanye announced he would be debuting Yeezy Season 3 as well as organising a listening party for his album The Life of Pablo. Lil Yachty was in attendance, rocking an unseen adidas Yeezy sneaker.

Dubbed the adidas Yeezy Boost 350 V2, the sneaker was one of the standout moments of the show. Sporting a grey Primeknit upper with a large orange stripe across the midsection, it was a perfectly balanced shoe. Wearing a set of Yeezy Season 3 cargos and a heavy-duty sweater, this look drew a lot of attention at Madison Square Garden. Lil Yachty’s Yeezy love hasn’t changed either, with the rapper sporting a number of exclusive pairs.

When news of a collaboration between Off-White™ and Nike began circulating in 2017, the fashion world was interested. Though it would take nearly a year for us to get an official look at the collab, it was certainly worth the wait. Taking ten iconic Nike silhouettes, Virgil Abloh created something entirely new altogether. Of course, there were some standout models, but few sneakers were and still are as coveted as the Off-White™ x Air Jordan 1 “Chicago.”

Made famous by Peter C. Moore’s 1985 design, the “Chicago” colourway of the Air Jordan 1 is one of the most important sneakers in history. Abloh’s take on the sneaker saw him deconstruct the silhouette to its bare bones. However, it was the subtle details that made the Off-White™ Jordan 1 such a hit. Text across the medial side, shoelaces and midsole was something that had never been done before. Exposed foam around the collar, as well as a zip tie attached the laces, were unique features the sneaker world was not used to.

As you can imagine, these sold out almost instantly on release day. Over the past three years, the Off-White™ x Air Jordan 1 “Chicago” has become a grail for many. Now selling for nearly 30 times its original retail price, these are a serious pair for any collector.

Over the past few years, Travis Scott and Nike have created some of the most sought after sneakers in history. Back in 2018, La Flame revealed that he would be launching his own Air Jordan 4 inspired by his beloved Houston Oilers. However, after the launch, there were Travis Scott x Air Jordan 4 samples that many wanted to release. One of those was the “Olive.” As a friend of Travis Scott, Lil Yachty managed to secure his pair relatively easily.

Draped in a premium olive suede throughout, this 1 of 25 sample is one of the rarest on the planet. Waxed laces, as well as a translucent set of ankle straps and midsole, only add to the allure of this AJ4. On the back, “Cactus Jack” and “Nike Air” branding can be seen. Even the insoles and tongue feature “Travis Scott” branding. Pairs rarely come up and when they do, they carry a high price tag. The last pair of these Jordan 4s sold for an eye-watering €35,000. We hope you’ve got deep pockets if you’re going after these.

There is no denying just how influential Kanye West is in the sneaker community. However, before creating sneakers with Nike, Louis Vuitton and adidas, he was a huge fan of BAPE. Founded by Nigo in 1993, BAPE has remained one of the most important brands in streetwear. As West’s fame grew, so did his love of all things BAPE. After wearing and owning nearly every single BAPESTA on the planet, Kanye finally got to design his own in 2007.

Taking inspiration from his College Dropout album, Kanye created one of the best BAPESTAs of all time. The clever combination of brown and sail with splashes of hot pink made this sneaker irresistible. However, it was the large bear across the rear panel that made these distinctly Kanye West. Over the past few years, these BAPE sneakers have gotten harder to track down in good condition. For Lil Yachty, however, he’s managed to get his pair secured. 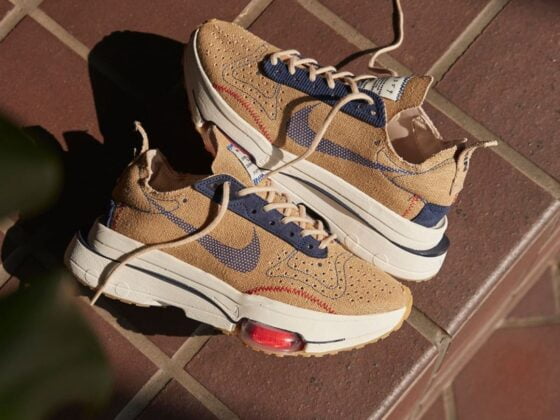