Yesterday saw Virgil Abloh debut his fourth collection as Artistic Director of Louis Vuitton Menswear. The show titled “Heaven on Earth” was a resounding success, bringing together some of the fashion world’s biggest names to see it. 1,200 guests headed to the show, with a set reminiscent of Alice in Wonderland rather than a runway. One of the biggest moments for sneakerheads, however, came from Abloh himself.

Whilst surrounded by giant tools of the fashion trade, Abloh posted a picture with a remixed version of the Off-White™ ‘MCA’ x Nike Air Force 1. At first glimpse, the most obvious change is the use of a black sole instead of the familiar blue. However, on closer inspection, a few other additions had been added to this sneaker.

Taking inspiration from the recent Off-White™ x Nike Dunk, this Air Force 1 featured the double lacing system. Blue laces can be seen draped across the front of the sneaker, with a set of white laces underneath. A red Off-White™ tag was also seen, reminiscent of the original ‘MCA’ Off-White™ sneaker.

Whilst fans may be eagerly awaiting the release of this hybrid silhouette, there is no other information regarding the shoe. Given Abloh’s close ties with Nike, we are assuming that this may be a one-off for Abloh alone. For now, let’s just pray that these see a wider release.

Black Satin Air Jordan 1s are On the Way 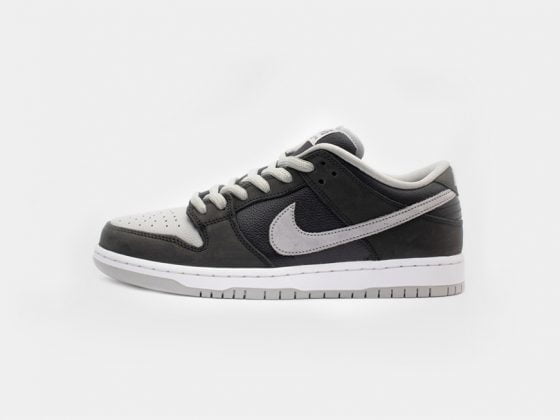 A Detailed Look at the Nike SB Dunk ‘Shadow’